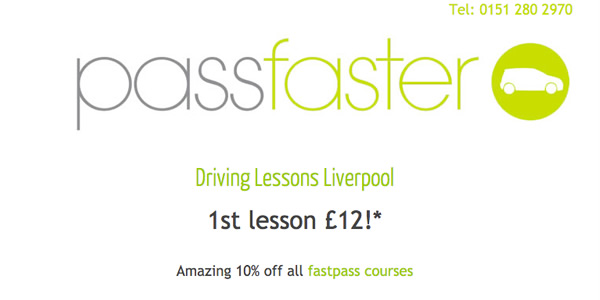 Passfaster is Liverpool's largest driving school and has been running for over 15 years. It's a family business, run by Chris and they have over 20 instructors working across the city.

Chris contacted us a couple of years ago and asked us to build him a new web site with more features. He liked the old site design so he wanted the new site to replicate this as much as possible but crucial was that the new site would work well for SEO purposes.

The old site lacked some features, meaning that it was difficult to update but it was ranking well in the search engines. Part of the build process for the new site was to ensure that these rankings were not lost.

We started work building the new site and launched it back in 2014. Since then we have been steadily working on the SEO for the site for these search terms:

Although most of the hard work has been done, it is important to continually maintain a site's SEO work as other sites come along from time to time to try and knock our site off of the top spot.

You can take a look at the Passfaster site here, or try for yourself by entering one of the search terms above, into Google.

We're a small team who support hundreds of web sites, small and large, across the UK and beyond.

We love, web sites, SEO and helping your business grow.

If you have any questions or are having problems, just get in touch.

Use our 'Contact Us' page to call, e-mail or talk to us on live chat.

They were able to reflect the ethos of my business, highlight the strengths and responded very quickly to any suggestions I made. I was very impressed with the service and thought it good value for money.